Regular contact forms don’t work, there’s little to no room for being personal and people simply don’t see what’s in it for them.

The truth is: We’ve become “blind” to the static forms that you find on every website.

But there is an alternative!

A recent study by Demand Metrics showed us that interactive surveys manage to generate 2X more conversions than static forms.

Interactive content captures the attention of a possible lead long enough to both convey a lot of useful information and to make them convert.

That’s exactly what Hanneke and Rik from Eneco Netherlands did. They created a playful, interactive survey in the shape of a calculator that collected them almost a 1000 new leads in 6 weeks.

Here’s how it went down:

Who are Hanneke and Rik?

First, I’d like to introduce you to the two masterminds behind the story.

Hanneke van der Heijden and Rik de Vette work for Eneco Netherlands. It is one of the largest producers and suppliers of natural gas, electricity, and heat in the Netherlands.

Hanneke is Design and Communication Queen in the business department of Eneco, Rik works as a “Rapid Prototyper” within the same department. And together they are part of a development team for new products for Eneco Netherlands.

That development team is where the magic happens!
Together they look at new products and work out the most efficient ways to market them to their audiences.

And with a tool like Survey Anyplace, they can reach out to clients to collect feedback quickly and effectively.

How they used an interactive survey for lead generation

In 6 weeks, Hanneke and Rik collected more than 1000 leads with a single survey, where they had hoped to collect only 200…

We wanted to know more!

They used Survey Anyplace to create the “Calculaadtor”. A fun play on words that (roughly translated) means they built a calculator that could give people an idea of what it would cost to buy an EVSE (“Electric Vehicle Service Equipment”, a home charger for your electric car) and convert them into leads.

We’ll call it the “calculator” throughout the article 😉

Visitors of the Eneco website simply answer the short, easy questions and the lead generation survey gives them a ton of information in return. Even if the subject is rather serious and hard to understand. You can give an example-version of the EVSE-calculator a try here:

Don’t worry, this blog-version won’t collect your emails to use for promotion afterward. It’s just to give you the idea of how the setup works!

In the real-life case, respondents would get a personalized email in their inbox with their calculated price and some additional information.

And in the meantime? Eneco would have collected all the specific information that is needed to help their sales team along in qualifying those leads. They collected contact data and personal preferences around the use of an EVSE.

In 7 questions, they tell us all about their calculator idea and success.

1. What sparked the initial idea for the lead generation calculator?

Rik: “I’d been having some conversations with a number of entrepreneurs to get an idea of where they stood in potentially buying electric car chargers.

In those conversations, it quickly became clear that there is an overload of information about EVSEs online. And it’s very difficult to filter the valuable information from the distractions. People lose focus and, unfortunately, move on.

All these people really need is a simple source of information that tells them what the cost of an electric car charger will be.

That’s why I started thinking about efficient ways that could inform potential buyers in less than a minute about what they really need to know. And that’s how our EVSE-calculator saw the light of day!”

2. How did you execute that idea?

Rik: “As a Rapid Prototyper and Growth Hacker, it’s my job to continuously look for new tools and ideas. That’s how I came across Survey Anyplace as well. I signed up for the free plan, created a test and found the tool very user-friendly, with room for fun too. That’s what pushed us over the edge to start working with you guys.”

Hanneke: “Next to the swift flow and style that you can find in the tool, the way we approach our target audiences is our own choice. Still, it was great for us to learn that the setup of Survey Anyplace allows that personal tone of voice and look and feel.”

Rik: “Yes, especially in our approach towards our target audiences we try to use a tone of voice that makes things a bit fun. There are hundreds of survey tools out there, yet almost all of them are rather boring and general with a regular layout.

Here we had the freedom to add pictures, GIFs and edit the flow of the way questions are asked to make it feel alive and fast and intuitive.”

3. What were your hopes for the calculator? Did you set any goals?

Rik: “We wanted to create awareness around EVSEs and start selling them.

The primary goal of this lead generation survey was to inform people in a quick and efficient way, by giving them a very specific price for an EVSE.

We also hoped that a lot of people would see this and actually would consider buying one of those EVSEs from Eneco.

The next step in that trajectory is that people will actually start buying them.”

4. How did you promote the use of the calculator?

Rik: “We launched the calculator on our website in combination with a Facebook Ads and a Google Display campaign that lasted for 6 weeks.

This proved to be an excellent combination, based on how well the calculator got filled out after launching these campaigns.

As soon as the campaign has ended, we will be embedding the calculator on our website in a dedicated spot.”

5. What were the results of your lead generation campaign?

Rik: “Well, the tool is up and running for about 6 weeks now and we already managed to send out quotes to some qualified leads. But the purchase of an EVSE takes a bit of time. As we would say it in the Netherlands: It’s not like you’re buying a cheese sandwich! 🙂

When we take a look at the numbers, though, we’re very pleased with the results. We’re very close to our 1000th respondent in just 6 weeks. Which is great if you know that we aimed for about 200 responses when we first started out.”

Hanneke: “Yes, we’re very happy that we managed to create such an amount of leads with the campaign. Our department Electrical Transportation now needs to follow up on those leads and help them further through the sales funnel.

Since we’re a development team for Eneco, it’s very important for us to be able to quickly gauge if there’s potential in a new product or idea. And it should have a very low threshold. That’s a goal that Survey Anyplace helps us with: to make faster, smarter decisions. ”

6. What are your biggest learnings?

Rik: “Well Eneco is a corporate business, with all the necessary corporate guidelines. Which sometimes makes it challenging to find a tool that can fit your needs.

In the automated emails, we were sending after people answered the calculator, we wanted a good-looking, branded design. Which involved creating a new HTML template and some cooperation from Survey Anyplace! This is something we would think about sooner in the process in future projects.

Let me share a tip that I’d liked to have had myself!

I had created some short tests in the tool already and liked what I saw. But I’d never used it as intensively as when we needed to get the campaign up and running. It’s important that you know what the tool can do so that you can get the most of it when you need it.”

Hanneke: “From the tool in itself we learned that it works well as a real lead generator, but also to quickly collect customer feedback and experiences. So we’ll be using it as a regular survey tool as well.”

7. What is your advice for other people that want to start online lead generation?

Rik: “I think Survey Anyplace is a great tool for marketing managers working in a B2B environment like us. But also for growth hackers that are looking into new ways to set up marketing. It’s just a simple, easy to use tool!

Use it to make a quick first version that you can show your customers, learn from their feedback, start improving and make it even better!

I built the calculator in an afternoon. I showed that first version to a couple of customers and based on their feedback I can make changes. That approach of constant iterations works well for us and it feels as if the tool was built for that approach as well.

Hanneke: “Rik has already mentioned it very well. The great benefit here is the ease of use, the possibilities of putting the entire corporate branding inside another tool to use it as our own.

The easy, quick flow and style that is promoted by Survey Anyplace suits us very well.”

With just a couple of quick and fairly simple questions, Rik and Hanneke managed to capture their prospects’ preferences and their contact data. Simultaneously they also providing those prospects with useful information.

And they found it easy to accomplish too.

What about your content? Could it do with some interactivity? Learn more about interactive lead generation.

Or let us know your ideas in the comments! 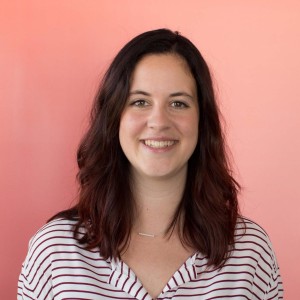